“Phu Quy full of sugar” and “Thiem Thu Thien Seal” were born after 15 years of research and production by Huong Viet Pottery Company, which have been recognized by Guinness.

“Phu Quy Manh Duong” is a feng shui plate weighing 400kg, 137.5cm in diameter, crafted continuously for 2500 hours (about 1.5 years). The plate is embossed, carved with a complex of pine trees, a pair of peacocks, bearing feng shui elements, mountains and the sun representing wealth, wealth and eternal happiness. This plate was recorded by Guinness as “The largest carved and embossed ceramic plate work”.

“Thiem Thu Thien Seal” is the old Thiem Thu toad, also known as feng shui toad, the sacred three-legged toad in Asia. The mythical toad sits atop a pile of coins and gold bars, has a porcelain crown of yin and yang, holds a coin in his mouth, and the North constellation on his back. 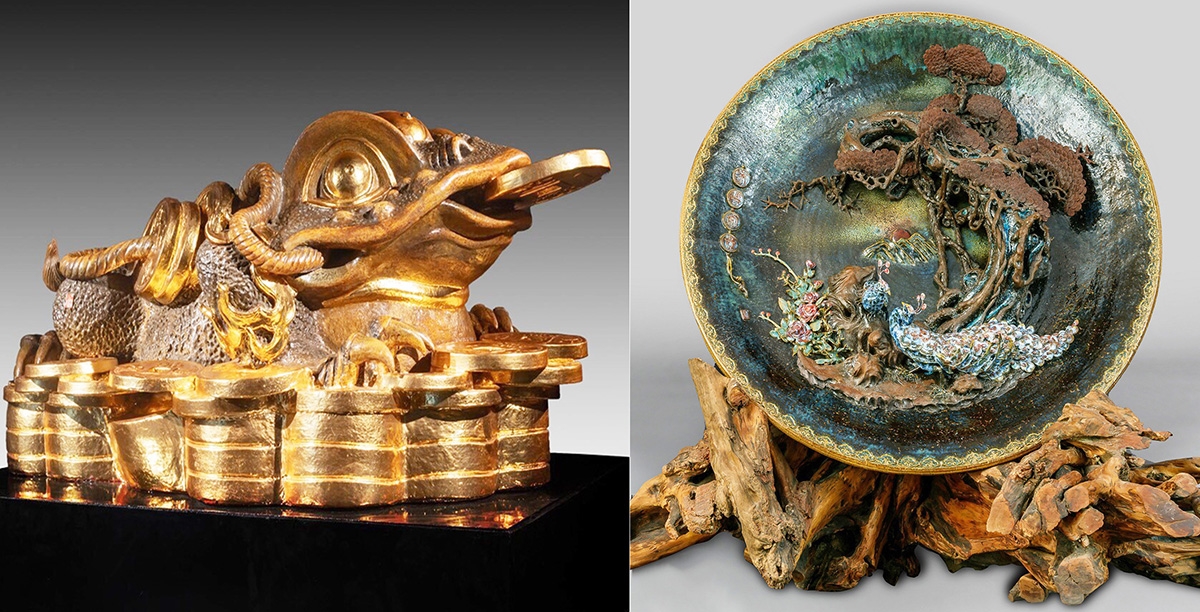 Find the uniqueness from the lotus stem

“When making yeast, I discovered that the lotus stem can be used to replace the rice husk material. In this new glaze line, the ash of the lotus stem is mixed with the Red River sediment layer and crushed powder of some natural minerals, creating a variety of colors, from brown to reddish brown or ivory white. ,…”, ceramic artist Huong Viet said the name of this glaze was named “Lotus Lien Hoa”. “Lotus” means alluvial soil of the Red River and “Lien Hoa” means lotus.

Using this new enamel layer, the blue color on the plate set “Phu Quy is full of sugar” gives a feeling of deep blue stretching and wide. In detail, if using ordinary enamel, it can only produce the green color of copper vitreous enamel, but the new glaze has created an iridescent blue – a rare variable color in ceramics.

To make these two top-notch works of art, no less than 10 times the artisans have to “break and rebuild”.

“The set of discs “Phu Quy is full of sugar” before being successful like today has experienced 5 broken times. Sometimes it was broken in two, sometimes it exploded, sometimes it was deformed, and it was only the 6th time that a successful work was released. With Thiem Thu statue, it is broken 4 times, only 5 times. 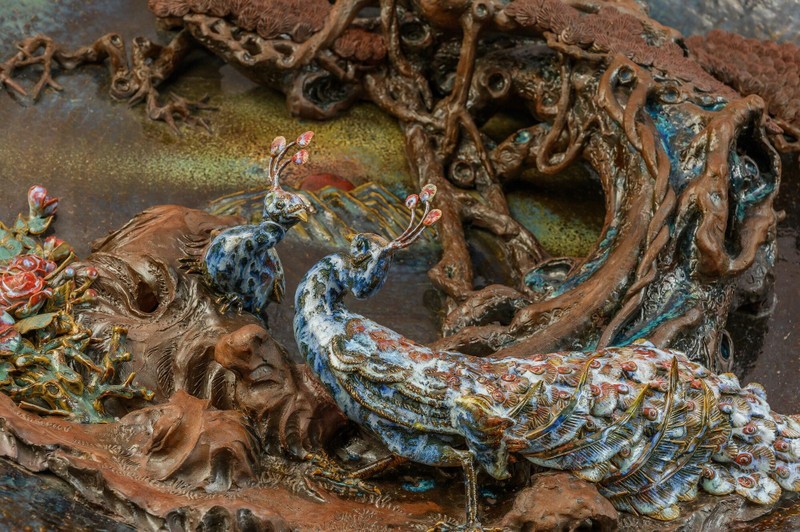 Two sets of specially crafted products of Huong Viet pottery represent a new direction: bringing sculptures and reliefs to emboss on the ceramic.

To qualify for this record, according to Ms. Mai McMillian, both works must be made of ceramic and must exhibit recognized art. Measurements must be made by a qualified metrologist in the presence of two independent witnesses.

“Each piece of evidence has to be put together and submitted for our review. I would like to commend the record holders for following all the guidelines that led to the achievement of these two world records,” said Mai McMillian.

According to Phuong Anh